Surgery Part 5: Movin’ On Up? Not Quite 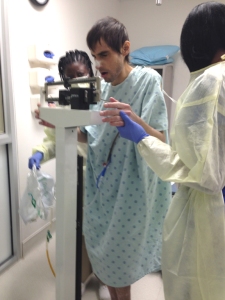 Getting weighed before leaving the ICU. “It’s all water weight!”

Things were looking good on Saturday. I was told I’d be moving to a proper room later in the day, and the doctors were very happy with the rate of my recovery. They didn’t tell me this, though. I just had to assume it was the case considering the giant tray full of food they ordered for me.

I had begun a liquid diet only a day before, yet somehow they were confident that my body was ready to eat a full meal consisting of chicken breast, mashed potatoes, steamed vegetables, pudding, soup (chicken, veggies and rice) and Jello. Woah — hold on, there! I had my first sip of juice only 24 hours ago; is this really a good idea?

After staring at the tray for a few minutes, I gave in to my hunger but did so with great care, choosing to sample only the soup and pudding. I ate about a third of the soup and half of the pudding, and chewed until there wasn’t anything left to chew on. I sat back and hoped it wouldn’t be a problem later on. It was such a small amount of food, so how could it?

As I relaxed and let my lunch digest, there was a knock at my door. Finally, the news I had been waiting for: A room was almost ready, all the way up on the 10th floor. I just had to wait a few more hours. While I was excited to get a “real” room, I was going to miss Julie and the other ICU nurses. There’s a special bond a patient shares with his or her caregivers after being nursed back to health from such a precarious situation. It’s like, I dunno, graduating from high school and saying goodbye to your favorite teacher or something.

I waved goodbye to Julie as I lied back on the transport gurney; I was on my way to the new room. I arrived at 5:30 p.m., and the transport assistant (or whatever his title is) helped me onto the bed. He showed me where all the controls were for the bed and TV, the nurse call button, etc. I looked at the information wipe board on the wall to see if it had the nurse’s name, but it was out of date. Oh well, I figured whoever it was would be by soon enough for an introduction.

Five minutes passed. Ten minutes. Twenty. Finally, 30 minutes later a woman in scrubs entered to take my vitals. She left without telling me her name or whether she was my nurse. After a couple of hours had passed, I gave up waiting and pressed the nurse call button.

“Hello, do you need something?” the woman at the other end asked.

“Yeah. I’ve been in my room for hours and haven’t seen my nurse. Can you send her in?”

About 30 minutes later, the nurse, Josephine, entered. She seemed OK enough, I thought, though I was hoping she’d be a little more accessible. (I soon learned that unlike the ICU, which had only a handful of patients, the main wings of the hospital had way more patients than available nurses and nursing assistants.)

At about 9:30 p.m., I needed my ostomy bag emptied. I pressed the nurse call button, and Josephine showed up … only to tell me she’d have to get her assistant, Fabiola. Sure, why not. I could wait another 10 minutes or so. In the meantime, I felt a bit tired and was hoping to get a quick nap in before Fabiola showed up.

I woke up realizing I had fallen into a deep sleep. I looked at the clock: 11:30. Two hours had gone by and no Fabiola. I grabbed the remote control and forcefully pressed the nurse call button, putting a bit of anger into it. I was getting frustrated.

“Yeah. I was supposed to have my bag emptied two hours ago, and no one has even come by. I want someone here NOW.”

Five minutes later Fabiola showed up and took care of it, but she complained the entire time.

“Josephine is such a mean person, always bossing me around. A real bitch. I can’t stand working with her. Every time she sees me…”

Great, I thought. I could look forward to seven-and-a-half more hours of that (before the next shift change and a new nurse). Good thing there wasn’t a real emergency. Josephine came by an hour later take care of my IV bags and medication. And, of course, complain about Fabiola.

“She’s so lazy! Ostomy bags are not my job. That’s what the assistant does, and she knows it. She just doesn’t ever listen.”

She went on for another couple of minutes, but I stopped paying attention. All I could think of was how much I missed ICU, which by that point had become a distant memory. Oh, what I wouldn’t give to be back there. If I had been transferred Saturday morning, my mom might have been able to stay the night (and take care of things those two knuckleheads couldn’t be arsed to do), but I would have to wait until Sunday.

As I went to bed Saturday night, my physical condition took a back seat to the sense of neglect I felt. Perhaps I had been spoiled in the ICU. But after watching my two supposed “caregivers” argue over who would have to “deal” with me, I couldn’t help feeling like a burden. However, this feeling didn’t last long. I would soon have a much bigger, more immediate problem.

This entry was posted in Crohn's Disease, General Disease, surgery. Bookmark the permalink.